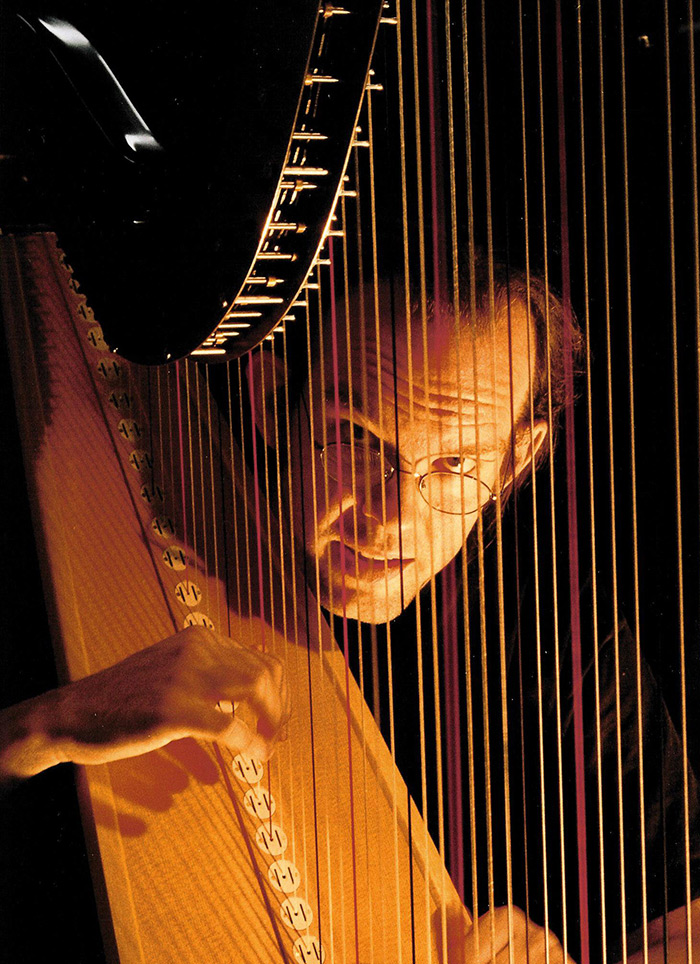 While attempting to live simultaneously in Brooklyn and on a farm in Switzerland, jazz harpist Park Stickney is constantly in motion, giving concerts throughout Europe and the U.S., solo, or with his various projects—most recently “The Lion, the Wolf, and the Donkey”, a trio with bassist Dino Contenti and percussionist Gigi Biolcati, which just released the CD Who is..the Lion, the Wolf and the Donkey? on the Incipit label.He’s performed and taught in nearly every harp festival that exists, from Adelaide to Zaragoza, appeared on the French television program “La Boîte à Musique”, performed on the QE2, recorded with the “Crash Test Dummies,” played with John Sebastian (of the Lovin’ Spoonful), made a video with Jonathan Coulton, jammed with young oud students in the West Bank, improvised cadenzas while playing the Mozart Flute & Harp concerto with Regula Küffer, played Wagner as a stowaway deep in the harp section of the Berlin Philharmonic, given concerts in a mine in South Tyrol, in a thermal bath in Switzerland, in a New York McDonalds, in Sri Lanka,  Shanghai,  Madras,  Hong Kong,  Moscow… He’s played Broadway pits in NY, toured with the Fantasticks in Japan, and appears on page 97 of Patricia Cornwell’s novel “From Potter’s Field.”An active teacher, Park is the jazz harp tutor at the Royal Academy of Music, London, an assistant at the Conservatoire National Supérieur de Lyon, and gives a harp improvisation class at the Haute Ecole de Musique in Lausanne, Switzerland.

Stickney has five solo CDs: Overdressed Late Guy, Action Harp Play Set, Still, Life with Jazz Harp, Surprise Corner,  and in January 2015,  All Harp – Globe Live, and has recently discovered that virtuosity at the harp doesn’t immediately translate to aptitude on the alphorn.